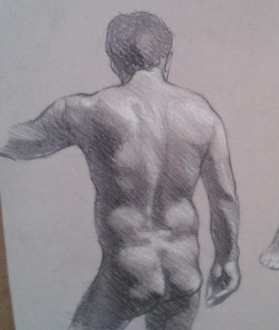 I am a Christian and have been since I was in the third grade (although there have been periods where I didn't live like it).  I am also a nude model and have been for the past 27 years.  A lot of people in the Christian faith, and especially in my church, may find the two to be incompatible, but they are not.  Of course, I go to a Baptist church, the same denomination that runs Baylor University.  In 1993, the art department at Baylor was forbidden by the board of regents to use nude models.  As far as I know, that ban is still in effect.

This attitude that nudity somehow equals sex or that viewing a nude body will lead someone into lust is a lie.  Our bodies were made in the image and likeness of God; therefore, our bodies, in and of themselves, are good and wholesome, clothed or unclothed.  It was Adam and Eve who tried to cover themselves after their fall, not God.  Why would God want to cover His own image?  And once God expelled Adam and Eve from the Garden of Eden, He gave them animal skins to use to protect themselves from the now sometimes harsh environment outside the Garden (and by killing the animals for their skins, He gave Adam and Eve their first taste of the wages of sin, death).

Nudity, even public nudity, was never condemned as sinful in the Bible.  In fact, God commanded the prophet Isaiah to go naked throughout the land for three years.   ...at that time the LORD spoke by Isaiah the son of Amoz, saying, “Go, and loose the sackcloth from your waist and take off your sandals from your feet,” and he did so, walking naked and barefoot. Then the LORD said, “As my servant Isaiah has walked naked and barefoot for three years as a sign and a portent against Egypt and Cush... (Isaiah 20:2-3 ESV).  Apparently, Isaiah wasn't the only one who received such a commandment.  Look at King Saul in 1 Samuel 19:24 (ESV):  And he too stripped off his clothes, and he too prophesied before Samuel and lay naked all that day and all that night. Thus it is said, “Is Saul also among the prophets?” Judging from the people's reaction, prophesying and public nudity seemed to go hand-in-hand in Old Testament times.  Would God command someone to do something that was sinful?  I think not.

I believe that Jesus Himself was crucified naked.  The Bible says that Roman soldiers cast lots for His clothes, and the historical record tells us that it was a standard practice of the Romans to crucify prisoners naked.  Personally, I find it interesting that before mankind's original sin, man was naked, and that the One who redeemed us from sin did so while naked. 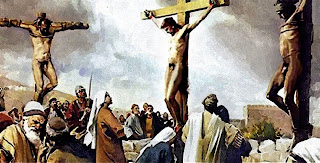 When I step onto a modeling platform in a life drawing class and drop the robe, I am both humbling myself and practicing the most extreme kind of modesty.  Whenever I read the word modesty in the Bible, I have to define it, based on contextual clues, as avoiding the practice of putting on adornment (braiding of hair, putting on of gold jewelry, etc.) to show off one's stature, as if one were boasting.  Today's parallel would be the wearing of expensive designer clothes, displaying expensive jewelry, or any other way in which people dress to show how well off they are, either socially or financially.  1 Peter 3:3-4 (ESV) says Do not let your adorning be external—the braiding of hair and the putting on of gold jewelry, or the clothing you wear— but let your adorning be the hidden person of the heart with the imperishable beauty of a gentle and quiet spirit, which in God's sight is very precious.  What then could be more modest than removing everything that might, in someone's eyes, elevate my own status?  Isn't that what being humble is all about?  Wasn't Christ showing true humility when he allowed himself to be stripped naked and hung on a cross to die for our sins when none of us deserved it?

When I'm on the model stand nude, I am pure.  I am there just as God created me, with nothing artifical.  Most life drawing rooms have a skeleton available both for drawing and for study, and I am always fascinated whenever I look at one.  The structure of the shoulders, with the clavicles in front and scapulas in back, seems impossibly complex when you also consider the muscle structure that has to be involved to make the bone structure work.  And the pelvis is a wonder, with its complex shape, the way that it supports the internal organs above it and how the rounded tops of the femurs fit inside to make the hip joints which enable us to walk.  The human body truly is God's greatest creation and is worthy of artistic study.  In fact, I can't think of a subject in creation more worthy.  It is, after all, made in that image of God.  I love allowing art students to study my body, to draw the shape of my spine, the curve of my hip without the interuption of a waistband or any other apparel.

As a Christian, I desire to be transparent.  I want to be the same person in the art class that I am at church or at my full-time job or in my home as a husband and father.  I don't want to misrepresent myself in any way.  I haven't been extremely vocal in recent years about my modeling, but I don't want to deny to anyone what I do.  When people hear that I was once a contestant on Who Wants to Be a Millionaire, their natural inclination is to ask to see a video.  I can usually point them to my Facebook page or to the Youtube video below, where they see my conversation with Regis Philbin about being a part time nude model.  Since the show was taped in 2001, long before my wife and I joined our current church, people there tend to assume that I stopped modeling some time ago.  Before starting this blog, I tended to let them keep assuming such things.

I volunteer in my church nursery every Sunday morning.  I've always had a natural affinity for babies, and on more than one occasion, I've been called The Baby Whisperer.  The job, if it could even be called a job, suits me, and I love doing it.  But that also makes me a "church leader."  I do have some concerns about losing that position as a result of starting this blog, mainly because of some objections within the church to drawings of me from 2007 that were posted on Facebook. If that happens, then so be it.  I am going to be the same Dan Hawkins, Christian, husband, father, IT technician, and art model, in public and in private, no matter where I am.
Posted by Dan at 6:41 AM

Dan
Fort Worth, Texas, United States
My name is Dan, and I have been a professional art model since 1984. Alas, my modeling is only part-time as I have a regular, salaried IT job to pay the bills. My interests beyond art and computers include movies and baseball. I'm married and have two sons and one granddaughter. I am the author of the novel The “Volunteer”, available here: https://www.amazon.com/gp/aw/d/1534635246/ My new book is called Life Models, available here: https://www.amazon.com/Life-Models-D-H-Jonathan/dp/1733090800/